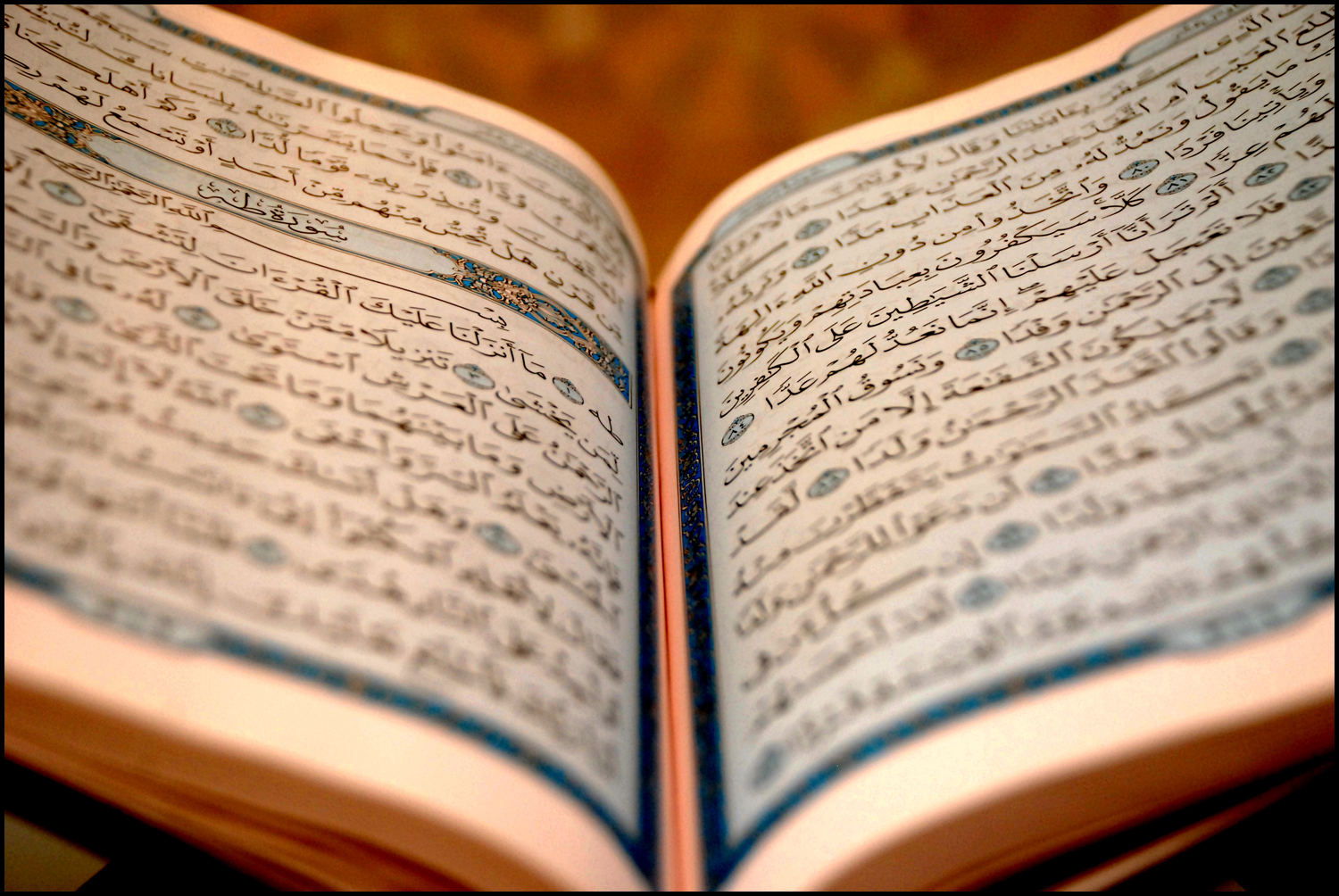 It is alleged that some verses of the Holy Quran deny freedom of religion and conscience, forming the basis for extremist ideology that enforces conversion of non-Muslims. However, an academic review of the context of these verses and their understanding in light of the fundamental teaching of Islam that there can be no compulsion in religion (2:257) fully rebuts this allegation.

In fact, Prophet Holy Prophet Muhammad (on whom be peace) has been recognized and lauded by academics and historians for his secular credentials and for upholding freedom of religion. Author and historian Michael Hart writes in his book The 100: A Ranking of The Most Influential Persons of History the following: “My choice of Muhammad to the lead the list of world’s most influential persons may surprise some and be questioned by others but he was the only man in history who was supremely successful on both the religious and secular levels.”

The allegation against these verses is that Islam does not allow those who disbelieve to voice their difference and rejection of its message. It thus does not allow for the freedom of religion and free speech.

The background and context of this verse is the severe opposition of the Meccans against the Muslims. The Meccans had bitterly persecuted Muslims for thirteen years. When this persecution failed as Muslims were invited to live and preach freely at Medina, Meccans took to looting Muslim property in Mecca which led to the Battle of Badr. The verse commands to fight in defense against such persecution and oppression which allowed no freedom of religion. This is affirmed by verse 22:40-41 which permits fighting so that cloisters, churches and synagogues too are protected. The Meccans are cautioned by their previous failures in destroying Islam and the failures of the opponents of earlier prophets of God.

This verse can also be understood better when read with 8:20 which says, if you resort to war again, we too will return to fight—meaning that armed conflict or enforcement are only valid in self-defense against aggression.

These verses are not advocating intolerance towards non-Muslims. In other verses, the Quran clearly says that a Muslim’s task is simply to convey the message, and that people are free to believe or disbelieve as they wish (2:257) (18:30) (10:100). A similar commandment has been given in 2:194:

And fight them until there is no persecution, and religion is freely professed for Allah. But if they desist, then remember that no hostility is allowed except against the aggressors

The defensive principle of engaging warfare in Islam has been clearly highlighted in this verse: armed defense is allowed only against those who transgress bounds through hostility, and not to anyone who peacefully opposes Islam. This is further supported by 2:191 —

And fight in the cause of Allah against those who fight against you, but do not transgress. Surely, Allah loves not the transgressors.

Prophet Muhammad (sa) signed many treaties with non-Muslim tribes. The meaning of the verse under discussion is to fight the transgressors until religious freedom is established. If it meant to fight until people are forced to accept Islam, Muhammad would not have signed treaties allowing religious freedom. The Muslims were persecuted to the point that they had to take up arms in self-defense. When Muhammad and the Muslims of his time conquered Mecca, no one was compelled to join Islam. Based on these facts, the allegation that these verses enjoin religious intolerance is baseless.

Quran (2:257) Let there be no compulsion in religion

The Holy Quran and the life of Holy Prophet Muhammad (on whom be peace) demonstrate that true Islam does not sanction death or any other worldly punishment for changing one’s faith (i.e., apostasy). For example, the Holy Quran declares:

Quran (6:108) And if Allah had enforced His will, they would not have set up gods with Him. And We have not made (Muhammad) a keeper over them nor art thou over them a guardian.

This verse clearly states that no person has any right to compel others in matters of faith. Forced faith is no faith at all. In response to those who insult or deride Islam, i.e. commit “blasphemy,” true Islam advocates complete restraint, just as the Holy Quran prescribes:

Quran (25:64) And the servants of the Gracious God are those who walk on the earth in a dignified manner, and when the ignorant address them, they say, ‘Peace!’.

The true teachings of Islam are also demonstrated by the actions and declarations of Holy Prophet Muhammad (on whom be peace) who provided a document of protection to Christians at St. Catherine’s Monastery at Mount Sinai. Below is an excerpt from this document which has been cited by several Western academics as evidence that Islam does not preach enforcement of religion nor deny its freedom.

…whenever monks, devotees and pilgrims gather together, whether in a mountain or valley, or den, or frequented place, or plain, or church, or in houses of worship, verily we are (at the) back of them and shall protect them, and their properties and their morals, by myself, by my friends and by my assistants, for they are of my subjects and under my protection. I shall exempt them from that which may disturb them; of the burdens which are paid by others as an oath of allegiance. They must not give anything of their income but that which pleases them—they must not be offended, or disturbed, or coerced or compelled. No one is allowed to plunder the pilgrims, or destroy or spoil any of their churches, or houses of worship, or take any of the things contained within these houses and bring it to the houses of Islam.

And he who takes away anything therefrom, will be one who has corrupted the oath of God, and, in truth, disobeyed His Messenger. Verily I shall keep their compact, wherever they may be, in the sea or on the land, in the east or west, in the north or south, for they are under my protection and the testament of my safety, against all things which they abhor… Do no dispute or argue with them, but deal according to the verse recorded in the Quran (29:47): ‘Do not dispute or argue with the People of the Book but in that which is best’.

Thus they will live favored and protected from everything which may offend them by the callers to religion (Islam), wherever they may be and in any place they may dwell. Should any Christian woman be married to a Muslim, such marriage must not take place except after her consent, and she must not be prevented from going to her church for prayer. Their churches must be honored and they must not be withheld from building churches or repairing convents. They must not be forced to carry arms or stones; but the Muslims must protect them and defend them against others. It is positively incumbent upon every one of the Muslims not to contradict or disobey this oath until the Day of Resurrection and the end of the world.

(“The Covenants of the Prophet Muhammad with the Christians of the World” by Dr. John Andrew Morrow, Angelico Press)

If the mufti of Constantinople sent a missionary to preach Mohammedanism to us, he would find a pulpit at his service.

And John Adams called Holy Prophet Muhammad (on whom be peace),

a sober inquirer after truth.

So, why would the American Founding Fathers and legends of the modern liberal ideal lend such credence to the Islamic tradition?

Academics have reasoned that such admiration is owed to the principles of freedom, justice, and equal rights enshrined in the constitution drafted by Holy Prophet Muhammad (on whom be peace) as chief arbitrator of Medina. His subjects had included Muslims, Jews and polytheists seeking peace and accord as one community. The Constitution of Medina established citizenry (and equality) before the state. It is the first such known constitution in history.

Western nations today, seen as beacons of freedom and liberty, have laws restricting free speech For example, a person can be apprehended for making statements that threaten to disturb public peace (like yelling “bomb” in a crowded area)   This obviously does not mean free speech is non-existent, but some restrictions are necessary for any peaceful society.

Similarly, Islamic teachings also have certain restrictions on speech. The Quran mentions a penalty for those people who persistently instigate tension in the state.  Speaking about other faith leaders is another situation in which caution must be exercised. Islam prohibits one from using disrespectful language for such figures because they are considered dear and beloved to others. The Holy Quran lays the framework for a safe and peaceful application of freedom of speech with the following verse:

Quran (6:109) And revile not those whom they call upon beside Allah, lest they, out of spite, revile Allah in their ignorance. Thus unto every people have We caused their doing to seem fair. Then unto their Lord is their return; and He will inform them of what they used to do.

Ultimately, respect for others is necessary to maintain peace in society. Otherwise, the majority would feel completely free to revile those in minority and label it freedom of speech. Upholding this basic level of respect in society is not independent of freedom of speech, but it actually serves to preserve the integrity of free speech.